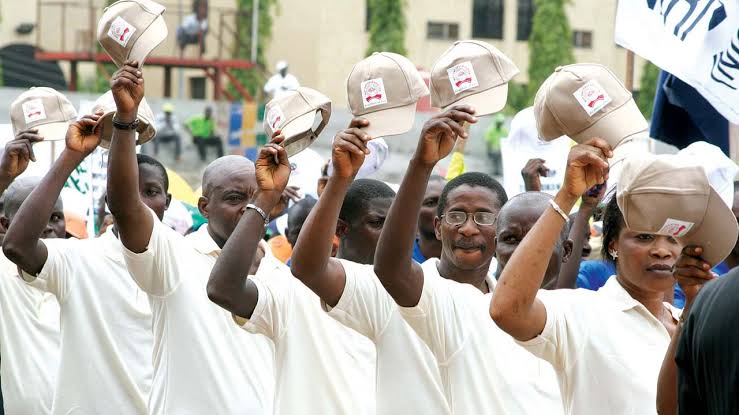 Written by Abdullahi Yahaya
GET THE ALBARKA RADIO APP

The members of the Amalgamated Union of Public Corporation Civil Service Technical and Recreational Services Employee ( AUPCTRE)  in Bauchi State have on Thursday morning peacefully took to the streets protesting the nonpayment of salaries of their Anambra State counterparts for over one year.

AUPCTRE mobilised its members across the 36 states of the Federation to join the solidarity protest to enable them to press home the demands of their colleagues in Anambra State.

In Bauchi, the procession alighted to the two branches of a commercial bank that allegedly starched the salaries of Anambra State AUPCTRE members thereby subjecting them to untold hardship in view of the economic woes of the country.

Bauchi state Chairman of the Union Comrade Saleh Umar Misau who led to peaceful demonstration said they embarked on such action to press home the demands of their members in Anambra state over the failure of the Anambra state government to pay its members their own salaries for over a year now, which according to him the demonstration is taking place simultaneously nationwide.

The Chairman said the union has won a court case on this tussle filed by the union headquarters sometimes back but the dependants have recently appealed the earlier judgment which this action has further put the lives of their members and that of their families into miserable conditions.

” Our members in Anambra state are dying over lack of food and shelter we need justice, if we allow this to continue then there’s  is no need for us to be called leaders “

The Deputy National President of the Union Comrade  Abdullahi Ibrahim called on the Anambra state government and the commercial bank to respect the law and settle the salaries of their members to allow them to supply food to the dining tables of the families as well as have other critical ends meet.

He added that the union will not fold its arm seeing its members in a discomfort condition and will continue to follow the rightful channels with keen interest until the right of its members in Anambra state is made.

The protesters were also seen carrying different placards with various inscriptions such as an injury for one is an injury for all, we need justice e.t.c while some security personnel were visibly seen keeping them protected on the other hand the bank security was also seen protecting the bank from the protesters.

A PRO Blogger. A Web Designer and Developer. A Publisher. A Database Engineer. A Social Media Strategist. & an IT Enthusiast.